There are many occasions in which we find the presence of different species of birds in areas where they constitute a problem or at least a risk to health, the safety of food or for the conservation of heritage. 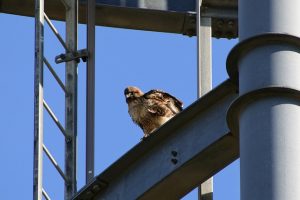 The use of physical methods (nets, spikes, electric shocks, acoustic or visual repellency systems) that prevent the entrance to certain areas or the laying of birds on structures is not always a sufficiently effective method.

When the birds are inside buildings, especially when they are dedicated to the production or storage of food, and there is a strong desire for them to stay in those areas, it is very difficult to expel them from them. In these cases, the use of anti-deposition systems is not appropriate since they are located in a multitude of locations (existing structures on the internal face of the roof, walls, shelves, etc.), the repellent systems are ineffective since they are masked by noise or The rest of the existing visual elements in the facilities and the capture through cages or trapping systems is extremely complicated due to the daily dynamics of the production activities that are carried out in them.

Falconry consists of the art of using raptors to capture other winged species, this original activity is being readjusted for a secondary action that is the use of these birds, as natural enemies of other species that usually invade urban areas / factories (mainly sparrows, pigeons, starlings and seagulls), causing their expulsion from these areas and preventing their re-entry by linking them to the presence of these predators. However, it is not about simple actions, to obtain results it is necessary to have expert teams of falconers, who have enough bird variability to be able to act in all situations (hawks, kestrels, Harriers, harriers / eagles, …), knowledgeable about the behavior of each of the bird species used for this purpose, their flight capabilities, their level of activity, their ability to generate panic in the specific species on which we want to act (no one knows that it is not the same a dove as a sparrow). However, probably the most determining factor is to carry out adequate planning and comply with it systematically, modulating it, if necessary, to the adaptations that the birds under control carry out to avoid the presence of their predator ( changes in behavior altering the hours of activity, modification of the areas of perch or nesting, etc). This factor is critical, nobody can expect effective results with isolated actions or not long enough in time. Success in this type of action exists, but it always goes hand in hand with perseverance and repetition in the flight of birds in order to first generate panic and their expulsion and later to maintain a memory of it and thus avoid the reentry of the same. The first phase has a variable duration and can be extended up to a month of visits every 2-3 days or even more and the second must be considered a preventive treatment that must be maintained over time in a similar way to how treatments / inspections are carried out for the control of rodents or insects.